31st December 1984 – Rajiv Gandhi takes oath as India’s New Prime Minister after winning 415 seats and creating history in India’s Elections history. The 1984 Elections were the best for Indian National Congress. The death of Indira Gandhi turned out to be a huge sympathy factor and brought 415 seats wins to Congress. This was also the day of humiliation for BJP, the party which won only 2 seats. But BJP had everything to gain…

LK Advani the new president of Bharatiya Janata Party, the aggressor had a different approach. Rajiv Gandhi was poor as Prime Minister and we all know why. His policies were not taken positively by the people of India. All he was famous was for corruption, scandals, terrorism, and his involvement in the civil war of Sri Lanka and LTTE. Rajiv Gandhi was advised to stay out of the affairs of Sri Lanka, but he didn’t listen to the people of his party. Later to save himself from power, he ordered to open Babri Masjid Gates.

This is the biggest mistake till date by Congress that opened the floor for BJP to get back to power. The process was on but it would take time. BJP and its members knew it. Their major goal now was to dethrone Rajiv Gandhi and slowly take the ultimate power.

It was the time for BJP to rejoice and Rajiv Gandhi suffered a loss. It was expected that INC would lose the election but it was uncertain who will be the Prime Minister. The moment results were announced the decision wasn’t surprising at all. VP Singh of Janata Dal which won 143 seats, 2nd largest in coalition with BJP giving outside support. The target of removing Congress from power was achieved. Along with BJP, it had DMK, TDP and Left Front.

Everything was fine until one decision made by BJP’s Advani. Advani saw the opportunity to increase the vote share and wanted to encash them by organizing a Rath Yatra. Intending to Build Ram Temple, LK Advani went on Rath Yatra in the Hindu Heartland states. It started in Gujarat and it was to end in Ayodhya with the penultimate stop at Bihar. The major motivation behind the Rath Yatra was to unite the Hindus of India. 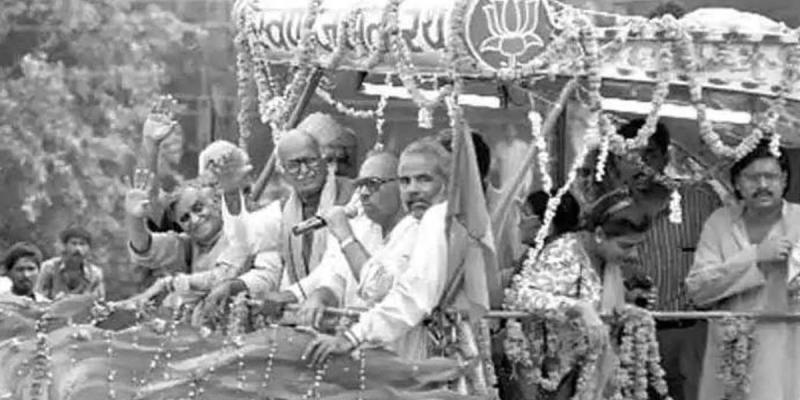 All was well, LK Advani and his party went as planned. Until Lalu prasad stopped the Advani’s BJP and put them all in the jail. There was a background to the arrest and a dram took place at the time and after the arrest. Advani was furious and powerless at the same time. It was then the time of BJP decided to withdraw support to Govt. BJP withdrew support to National Front and the VP Singh’s Govt collapsed. The Rath Yatra of 1990 which was supposed to bring the Hindus together had an instantaneous end in Bihar.

Right after the collapse of the National Front, there was a short period of governance by Chandra Sekhar with outside support from Congress. That also failed and the countdown for elections began. An unclear set of parties went for elections with the only BJP having the clear manifesto. What did BJP’s manifesto promise? A grand Ram Mandir in Ayodhya was the biggest promises made by Advani. Vajpayee was very much in the party and as usual, he was a calm politician supporting LK Advani. Initial phases of elections were over and during one of the rallies during campaigning, Rajiv Gandhi was killed by LTTE. This shifted the mood towards Congress. There was a clear distinction of votes after the assassination of Rajiv Gandhi. Yes, Congress lost their leader Rajiv Gandhi but they won the election which they would’ve lost. Congress went on to form the govt with support of other parties with PV Narsimha Rao as it’s a leader. We all know the impact that Hyderabad born PVNR made to India with his reforms of 1991.

Having said that, BJP also gained. Probably this was the election that boosted the confidence of BJP. Yes, BJP didn’t win enough to form the Govt, but they won 120 seats, highest in the history of BJP. This is politics and in political power matters the most, which BJP didn’t have. BJP was yet again at the cross borders of gaining power…

LK Advani went back to his promise of Ram Mandir. He was adamant on this and believed only Ram mandir will bring them to power in India. So, the RSS and BJP planned a rally to Ayodhya with lakhs of karsevaks. It was supposed to be a peaceful rally to reach Ayodhya and put forward the demand for the Ram Mandir. But, as soon as the rally reached Babri Masjid, the mob turned violent. All of them climbed onto the roof of the Mosque and demolished with sticks, rods, ‘Trishul’ etc. There is a conspiracy that it was all pre-planned and BJP has a big role to play. Vajpayee, Advani, Murali Manohar Joshi and others were arrested along with many others.

BJP was now struggling. They started to lose the state elections, there was no competition for Congress. The demolition act by BJP was not taken well by the people of India. Come to the election, people voted for Congress rejecting BJP. Added to this demolition was the impact of economic reforms. The positives fruits of 1991 reforms by PV Narsimha Rao started to reach people.

All was not well for BJP. But it had to stop. It did stop in Gujarat and Maharashtra. These were the two states where BJP won the assembly elections in 1995 and that brought back the confidence in BJP… Political correctness has become/been/will be the most difficult thing in India! #Politics #Elections BJP emerges as a new party to counter the centrism of Congress and Left Parties – BJP of Vajpayee & Advani!